A VPN server and a proxy server actually both share the same purpose: they help users hide their online identity. For example, users can change their location, allowing them to bypass so-called geo blockades. Many streaming websites can not be viewed in some countries, and if you want to view them you can either use a VPN server or a proxy server to connect to the Internet.

But what exactly is the difference between both and what benefits (and disadvantages) do they bring? An extensive answer to this question is important!

Proxy vs. VPN: the similarities

Before it is possible to clarify the differences between both options, it is also important to realize that there are effective similarities. Thus, they both offer an almost identical goal, but the processes is handled differently. And these differences also have certain consequences.

A VPN or virtual private network is a network that enables you to surf anonymously. But a proxy is a bit more complex, because there are different types. Therefore, more information about proxy servers is needed. 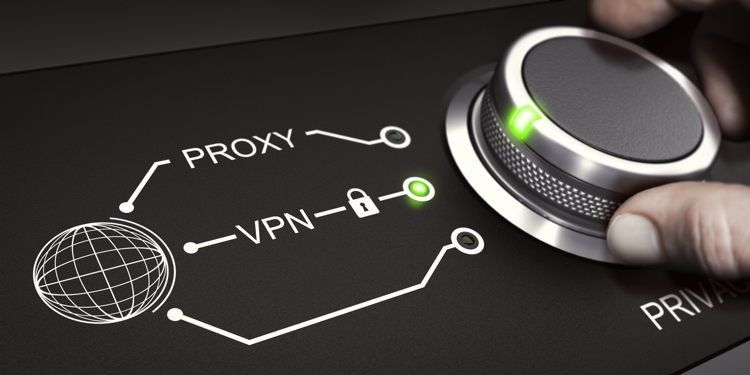 A proxy or open proxy is actually a computer that acts as an intermediary between the internet and your computer. The traffic made through such a server will apparently come from the computer, or your IP address, but it actually comes from the server itself. Compared to a VPN server, one can set up connections with different origins through a proxy server, and it is also possible not to encrypt all data traffic.

Proxy servers come in different shapes, depending on the protocol they are using. An overview:

Such servers use an HTTP protocol, which allows HTTP traffic to be read. This means that only traffic that begins with “http: /” can be interpreted by the server. In other words, pages including that. So you can only use such a server to surf, but with a great speed.

The advantage of such a server is that your IP address is hidden and you have access to certain geo-blocked websites. However, the disadvantages are quite extensive. For example, you can easily find your real IP address using Flash or Javascript. Also, traffic is not encrypted, allowing hackers and other third parties to always see what exactly you are doing. Finally, each browser must be configured separately to use the server.

As mentioned, proxy servers offer the advantage of having a lot of connections. Nowadays, such connections are used by many people in the form of HTTP or Socks servers. Unfortunately, these variants tend to exhibit very unstable behavior, sometimes leaving them offline and they also constantly differ in terms of speed and reliability. In addition, you as a user often provide sensitive information about yourself and there is hardly any support. Of course they are free, but to what extent is that an advantage?

Then there are, private proxy servers, which logically, are private, and usually they ask a certain fee. Certain VPN services provide HTTP and Socks servers, so you can also connect to the Internet in a safe way.

Such services are generally much more reliable because they are managed by leading companies. In addition, as a user you can count on optimal security and customized programs. BTGuard and TorGuard are examples of software that provide tailor-made BitTorrent clients.

Finally, there are also so-called web proxy servers that are connected to a public HTTP and thus provide an opportunity to surf anonymously on the internet from your own browser. It is therefore not necessary to download additional software or configure the browser. In addition, such servers are usually free.

The disadvantage of this option, however, is that you are exposed to many ads as a user and often features such as Javascript or Flash are only partially supported. Additionally, websites often block IP addresses that through such a server, thus limiting you. However, the big advantage is that they are very easy to use.

VPN-servers: nothing better than VPN safety

Now it’s clear what proxy servers are exactly, it’s important to explain some more about VPN servers. A VPN or Virtual Private Network is a locked Internet tunnel between a server and your computer. Internet traffic comes in and out via the host server. The big advantage of this is that government agencies and third parties can only see that you are connected to a VPN – but that’s all.

Further information about your location, your search behavior on the Internet, and so on are hidden at all times thanks to a 128-bit encryption for VPN security. Most VPN providers use stronger versions like 256-bit encryption to help protect users even better.

If you set up a VPN connection, you usually need to download and install a client on your device. The advantage is that you need little technical knowledge and that most providers also provide clear instructions for installing their software. Ultimately, the result is that you are always secured against third parties, whatever you do on the internet.

The only disadvantage of VPN providers is that they charge a fee. But that is of course a small price compared to the high degree of security you experience as a user.

In conclusion, it can be said that a VPN server is better than a proxy server in every aspect. This allows you to enjoy optimal online anonymity and protects all your data from third parties. In addition, a VPN service can also be used to protect against ISP throttling, as ISPs can not track your online activities.

Only if you really do not have the money you can choose for a proxy service, but even in that area, VPN providers often perform best. For example, certain services are available for less than 10 euros per month, such as PureVPN and ExpressVPN.